The Barking Gecko Theatre Company is Western Australia’s premiere theatre company for young people. Providing diverse mainstage work, weekly book readings, lectures and acting programs, their vision is to inspire audiences of all ages to embrace a creative life, full of curiosity, empathy and play. ‘We see ourselves as a cultural thread through every child’s life.’

in 2016 the Girgensohn Foundation supported the production of the play Bambert’s Book of Lost Stories by Reinhardt Jung, adapted for stage by Dan Giovannoni and Luke Kerridge. In this world premiere this internationally lauded novel is brought to life as a thrillingly inventive and remarkable production for adults and children alike.

This is the story of Bambert – an impossibly small man with an enormous love for writing. Tucked away in his quiet attic, his only companions are the characters he has created in his stories. And then one day, Bambert decides to set his stories free, to send them out into the world on little balloons, in the hope that they will find a home. The stories contain instructions: whoever finds them is to return them to Bambert with a stamp from wherever they landed, so he knows where they should be set. But as each day passes, and no stories return, Bambert’s hope begins to fade. Will his stories ever find a home?

Bambert’s Book of Lost Stories brings together Australia’s most extraordinary creative minds to realise this exquisite production. At times amusing, other times melancholy, this new production reminds us how stories connect us to the world and ultimately, the power of kindness.

Bambert’s Book of Lost Stories premiered at the Studio Underground (State Theatre Centre of WA, Perth) in April 2016 to magnificent rewiews. The production then claimed the 2016 Helpmann Award for ‘Best Presentation for Children’ and was nominated for ‘Best New Australian Work’. In 2017 Bambert toured nationally and internationally. In 2018 the play was performed at the Sydney Opera House. It has now been performed 70 times around the world including at the Edinburgh Festival. 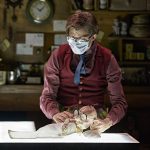